Chamomile is one of the oldest, most widely used and well-documented medicinal plants in the world, and is recommended for a wide range of health problems, including the treatment of sleep disorders/problems and relief for colds.

In many studies, this beloved tea has also been linked to calm muscle spasms, prevent bacterial viruses, and cure cuts and burns. If you’re curious about what else chamomile tea can do for you and your body, read on! 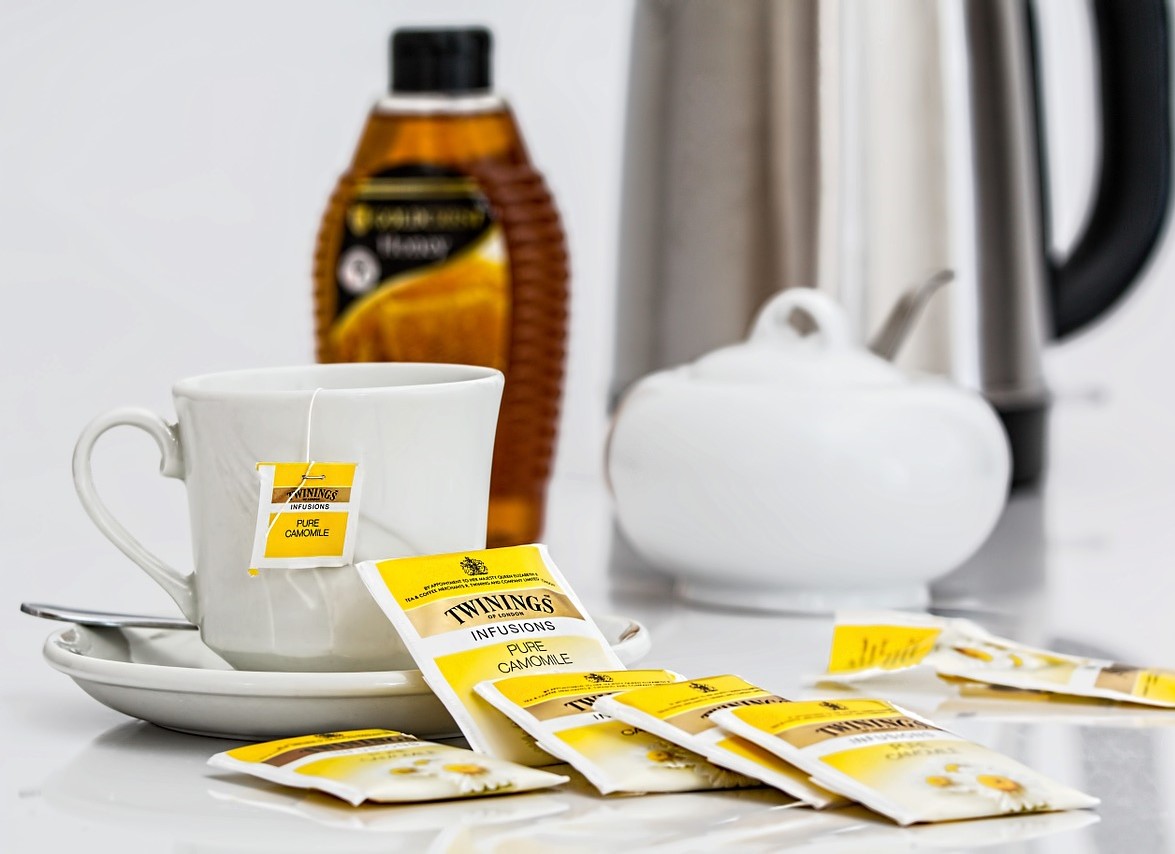 A recent study in the United States examined the connection between people who drink chamomile tea and mortality rates.

A total of 1677 women and men over the age of 65 participated in the study, which was published in the journal ‘The Gerontologist’ in December 2016.

The study of the 1677 women and men’s consumption of chamomile and the causes of death took place over a period of seven years. Fourteen percent of the participants in the study drank chamomile tea.

Researchers found that chamomile tea was associated with a 29 percent reduced risk of death among women after correcting for demographic differences, health problems and lifestyle.

The men in the study who drank chamomile tea did not have the same reduced risk of dying early.

“The reason for the difference between women and men is not clear, although women were shown to be more frequent users of chamomile than men,” said Bret Howrey of the University of Texas.

It is still unclear how chamomile tea is associated with decreased mortality.

Read the short article from The UTMB Newsroom here! 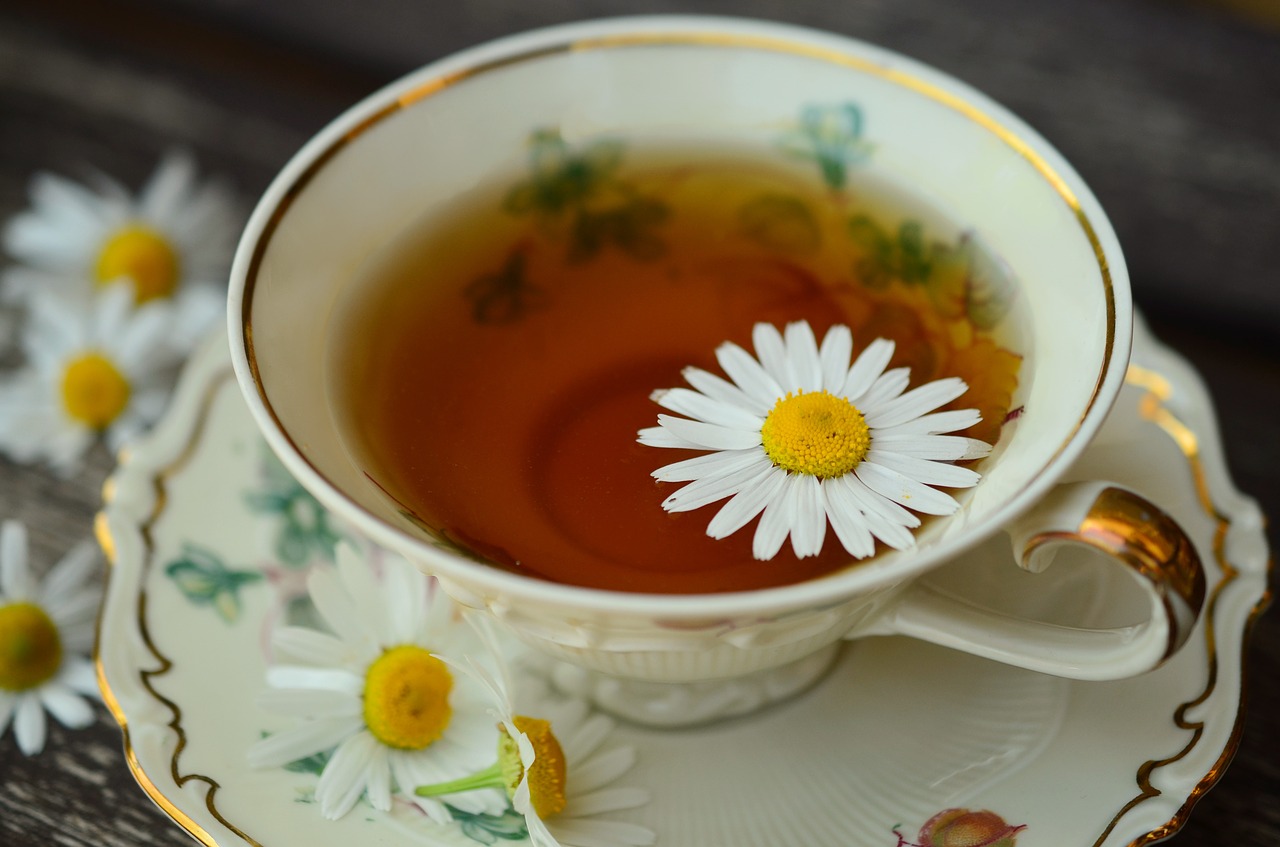 People have been drinking chamomille for thousands of years to help fall asleep.

A Japanese study of rats showed that chamomile extract helped rats fall asleep as fast as rats receiving a dose of benzodiazepine (a sedative).

That’s why, it is highly recommended to drink a camomille tea approx. half an hour before bedtime. This will help your body relax so you fall asleep quicker and easier.

Read about the Japanese study!

If you suffer from menstrual pain, chamomile tea can alleviate your discomfort. This is because chamomile tea is associated with an increase of the urinary levels of ‘glycine’ – an amino acid that has an ocean of health benefits – including strong muscle relaxant effects.

This explains why chamomile tea works well in easing menstrual pain. Researchers agree that this is due to the relaxing effect of glycine on the uterus.

Researchers have found an increased amount of this amino acid, glycine, in the urine of chamomile tea drinkers.

This is demonstrated in a study by Elaine Holmes of Imperial College in London.

As s mentioned above, chamomile tea gives rise to an increase in the body of ‘glycine’ , so this is the explanation of why chamomile tea seems calming.

‘Glycine’ is also known to calm the nerves.

Chamomile can be effective in controlling colds and improving your immune system because it contains substances that increase antibacterial activity.

At least this is the assertion, but in vitro studies (experiments outside a living organism) show no consensus among researchers as to whether chamomile possesses any significant antibacterial properties.

To read the documentation (only in Danish unfortunately), click here!

Researchers have found that rats who drank water with chamomile extract had accelerated healing of wounds. Two independent studies have been carried out on the effects of chamomile on the healing process in rats, and there is agreement that chamomile has a positive effect on this healing process.

Likewise, there is also a positive effect of chamomile on healing wounds in humans.

The research results are here! 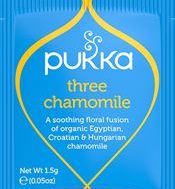 Pukka has made a chamomile tea using three kinds of organic chamomile.

They have chosen to use Egyptian, Croatian and Hungarian chamomile flowers.

Why they use three different types of chamomile flowers, they don’t say, but we imagine that the three types are slightly different, so we get the best possible flavour and health combination. 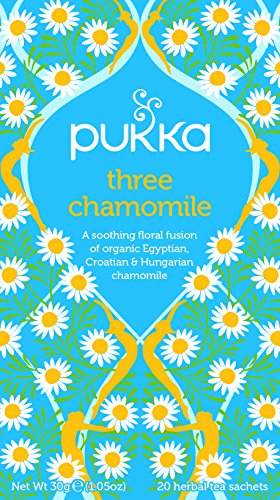 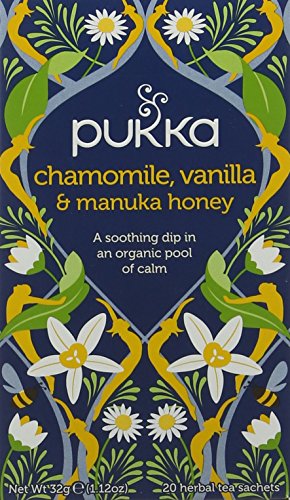 As with any other herbal remedy, keep in mind that herbal teas are not meant to diagnose, treat, cure or prevent any disease. You should always consult your doctor in case of any health problems.