The Book of Matcha: A Superhero Tea

Matcha is a Japanese green tea powder that is fondly referred to by teapigs as ‘a superhero among teas’, thanks to its natural antioxidant qualities. It is widely consumed in both food and drink in Japan, but is becoming increasingly popular around the world as its health benefits and unique taste are embraced globally.

Louise Cheadle and Nick Kilby uncover the history behind this phenomenal green powder, looking at how matcha is specially grown, graded and ground.

They also examine the health benefits of this super tea, which has been used for centuries by Buddhist monks to keep them focused during meditation, and how it is used today to flavour everything from Kit Kats to Oreos, bread to ice cream.

Matcha shots were served at New York Fashion Week in 2015, reflecting the growing popularity of this fascinating beverage, and many are predicting matcha will replace kale as the next big ‘superfood’.

Detailing the history of matcha, how it’s produced, its immense health benefits and its varied culinary uses, The Book of Matcha also features over 40 recipes that show you how to use this versatile and antioxidant ingredient at home.

Having slurped their way around the world, Nick and Louise were fully aware of the super powers of matcha, but in the UK matcha was relatively unknown until teapigs launched their range of matcha products in Selfridges in 2008.

Matcha was an instant hit, and since then the matcha category has become firmly established in the tea market. Teapigs has become the UK’s most successful premium tea company and now sells worldwide.

Their previous book, The Book of Tea, was published in 2015.

Note that the prices are indicative and the price may vary a little due to delays in the updating of the prices below. In addition, notice that there can be situations where a product is not in stock in a particular store. 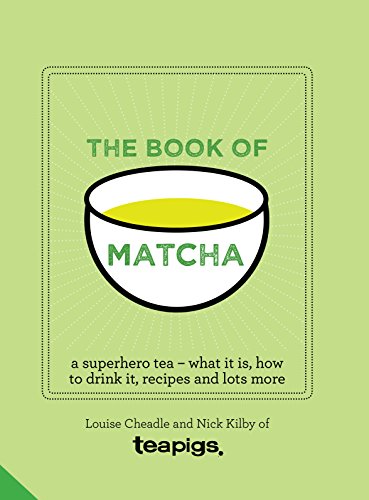 There are no reviews yet.

Be the first to review “The Book of Matcha: A Superhero Tea” Cancel reply
Translate »